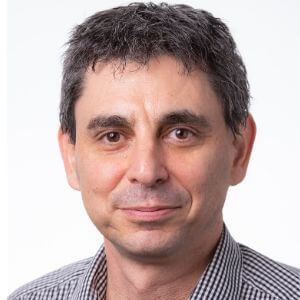 Steven Miller is a clinician and researcher in clinical neuroscience and psychiatry, visual neuroscience and consciousness science. He is a Senior Research Fellow (adjunct) and heads the Perceptual and Clinical Neuroscience lab in the Department of Physiology, Monash Biomedicine Discovery Institute.

The lab focuses on visual neuroscience, consciousness science, mood disorders, pain disorders and other psychiatric and neurological disorders. A major research focus is on the visual phenomenon binocular rivalry, including underlying mechanisms, individual differences, genetics and clinical applications. Steven is an authority on clinical and genetic binocular rivalry studies and has published seminal research in this field.

Another major research focus of the lab is examination of vestibular neuromodulation – a simple, inexpensive and safe brain stimulation technique – as a treatment for persistent pain states, mood disorders and other psychiatric and neurological disorders, as well as a tool for cognitive neuroscience studies. A further clinical focus of the lab is development and implementation of a new model of care for persistent pain management.

Steven has contributed to the scientific and theoretical study of consciousness by publishing a series of papers on foundational issues and having edited two volumes of papers for the book series, Advances in Consciousness Research (John Benjamins publishers, Amsterdam). Steven was recently appointed chief editor of this series.